And I love you, Edgar Allan Poe
Why does summer have to end? Why does autumn have to start? Why do colorful birds fly away only leaving a trail of dark feathers and bare trees? Why does it rain so much?  Why is everything so though? Why is it so cold that I shiver? Why does thinking of you make me sad and quiver? Why is all I see darkness and macabre scenery? Why do I "ponder weak and weary over" your spirit maladies? Why did we meet so late? Why couldn't you wait? Why couldn't you just stay?

Poe, creator of the short story, poet and creative thinker
I first came upon Poe's tales when I was about 10. I must admit that I knew it wasn't children's literature, but by that time I had already read the tales of the Decameron and the Arabian Nights. But I will talk about these books another time.
The Black Cat won my heart immediately. I got so caught up in the climax of the story that I even remember feeling the sensation of being walled up with the sole company of a black cat. I dreamt with the small airless room and I felt the claustrophobic sensation of being buried alive. I must admit that even being a cat lover I started to be afraid of black cats. It was Poe's intention to make us feel that dramatic situation.
He's considered the creator of the short story because he didn't just described an episode, as a tale would. He formed a certain "idea of effect" and then created characters, the setting and the circumstances to create a dramatic effect that would impress the reader.

Poe is considered the first Goth. His use of the dark and grotesque settings together with the fact that he suffered from drepresion made him a good depicter of some traits of human mind, and he showed them dramatically, by the use of a chain of events and circumstances, portraying the stories as a painter would have done. He called his stories tales because it was the fashion at that time. They were divided into: tales of Imaginative Science, Tales Grotesque and Amusing, Weird and Beautiful,  Tales of Ratiocination, and Tales Psychological and Gruesome. It's within this last that he included: Tales of Conscience, of insanity, of Revenge and Tales of Mesmerism. It's most famous story in this group is the The Tale Tell Heart.

He also wrote prose and poems. His poem The Raven has inspired me to write that poem that you have read above. He began his carreer as a poet, but as booksellers didn't encourage his poems, he found that story writing was more popular. In the writing of The Raven, he followed a process similar to writing a short story with the difference that poems create an emotional effect by its lyrical intensity.

This post is my tribute to Edgar Allan Poe.

A Love Story
Music was throbbing in their ears

Shimmering lights all around

Their eyes encountered without fears

Arms entwined in their first dance


It was attraction in a chance

They both already knew

An excuse for a smoke would do


An out they went with a full moon

And as they kissed

their love was doomed


Their loving was wild

Tongues, hands, arms, legs as in a fight

Entwined as if it were a matter of life


Later in his bed

It'd been his first time

For a long while


And as the stormy night died

in each others arms

And as they woke

It was time for good byes

Good Sunday for all Goth or not, for lonely or not, for depressed or not, for the happy.!
Happy week!! Long live my dear Edgar Allan Poe! Love you!
L.Quint 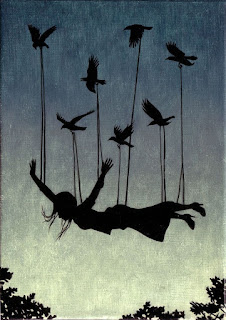